Whether you wear cowboy boots or hiking boots, you don’t have to go far for a memorable and affordable Spring Break. Plan a “staycation” in Trego, Gove, Logan, and Scott counties and you’ll find out that Kansas Rocks!

Here are a few of family-friendly spots to consider when planning your day trip or overnight stay in WaKeeney. (A $5 vehicle permit that will allow access into both Cedar Bluff and Lake Scott State Parks, as well as all other state parks in Kansas.)

Start your day watching the famous Kansas sunrise from the top of the 100-ft. limestone cliffs at Cedar Bluff Reservoir! Grab a coffee in WaKeeney then head out to the lake where prairie songbirds are waking up and greeting their neighbors. We’ve had an abundance of rain this year and the south shore provides a spectacular view of the lake and the wildlife who live in the park.

To get to Cedar Bluff Scenic Overlook take I-70 to Exit #127 at WaKeeney and turn south. Travel 18-miles south on Hwy 283, then turn east on Trego County AA Rd. Proceed east for 4 miles, north on Trego County 290 and follow the signs.This area of the park is free to the public.

Just west of Trego’s county line is Castle Rock and its Badlands. This geological feature is evidence of Western Kansas’s prehistoric past as the shoreline of the Western Interior Seaway… Fossils can still be found in the limestone rock formations and many short trails that wind through the Castle Rock and the Badlands.

To get toCastle Rock and the Badlandstake I-70 Exit #115 at Collyer, turn south and travel12.4 miles south on Banner Rd. Then, turn west and travel 2.8 miles, on Trego County U Rd. It will become Gove County K Rd. Turn into the pasture that has the Castle Rock sign & cross cattle guard. Pay attention to weather conditions, as the limestone trail can become difficult to drive on. Castle Rock is free to the public.

“GoWest, young man!” to Logan County where a 16-ft. bronze sculpture of the Old West hero Buffalo Bill “races” after an American buffalo. The privately funded installation was first created in clay, then broken into over 100 smaller pieces and cast separately. Once cooled, the pieces were welded together and a layer of patina as applied to the outside. Today, it welcomes visitors outside the Buffalo Bill Cultural Center, a cultural history museum that includes many artifacts from that legendary time period.

The Buffalo Bill Cultural Center and its Buffalo Bill Bronze Statue take I-70 to Exit #76 or    #70 Oakley. This museum is free to the public.

Stare down an enormous, fearsome prehistoric fish fossil at Oakley’s Fick Fossil & History Museum. Over 11,000 marine fossils are included in the museum’s collection, including a 15-ft. Xiphactinus Audax and the world’s oldest known mosasaur fossil with a rare intact eye socket. Other exhibits include artifacts from pioneer days and a “Funky Fossil Folk Art display.

Fick Fossil Museumis located just off I-70 at Exit #76 or #70 Oakley. There is no fee to visit the museum. A donation is suggestion. 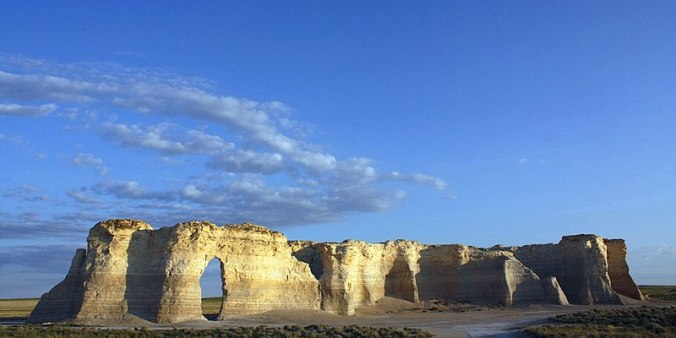 Explore the surreal landscape of Little Jerusalem Badlands State Park, Kansas’s newest state park. This 330-acre park was established in 2019 and features white chalk rock spires dating back 85-million years. Named for their resemblance to the ancient rock walls of Jerusalem, the area was once home to giant prehistoric clams and oysters, but now visitors will find ferruginous hawks, cliff swallows, rock wrens and several species of amphibians and reptiles living in the rock crevasses. There is a 1/4-mile scenic overlook trail and a 1-1/2 mile self-guided trail to explore, and a two-hour naturalist guided hike into the outcroppings is also available by booking ahead. 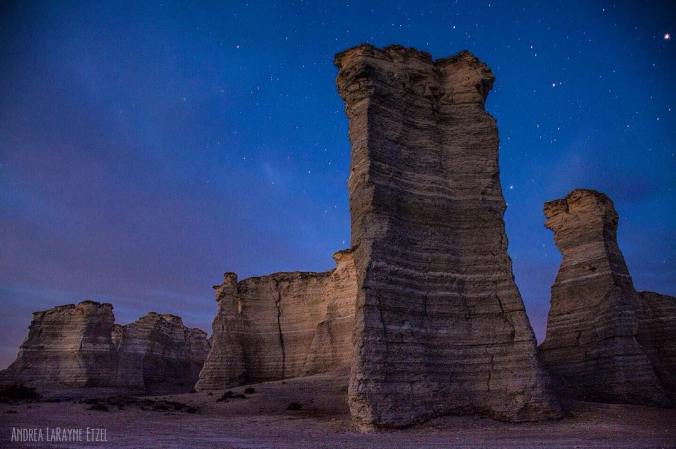 Visit the Badlands nearby neighbor Monument Rocks for more paleontology explorations. The 70-ft. chalk formations date to the Cretaceous Period and has been designated as one of the “8 Wonders of Kansas.” Photographers often gather at sunrise and sunset to capture dramatic images of the sun’s softening colors reflected on the white limestone cliffs. 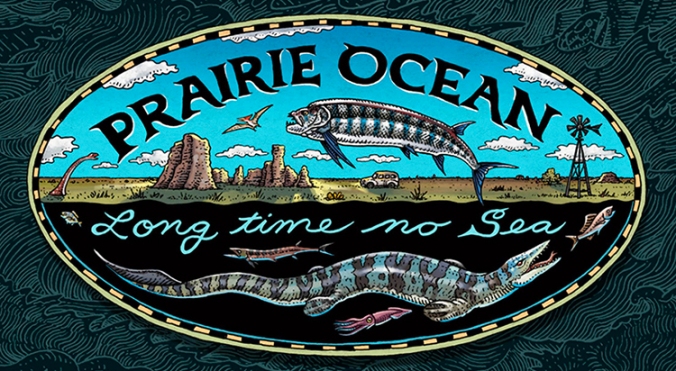 Stop by the Keystone Gallery and enjoy the art of Chuck Bonner and Barbara Shelton in the gallery’s Prairie Ocean exhibition. The gallery’s building was built from native limestone in 1917 to serve the community as a church. Today, you’ll find Bonner and Shelton’s paintings, landscape photography, and more. An additional collection includes a 20-ft. Mosasaur and fossils of several fish, reptiles, and bird species.

The Keystone Gallery is located on Hwy 83 South of Oakley.

Battle Canyon, the location of the last Native American battle in Kansas is located in a canyon about 1-mile south of the park. The Battle of Punished Woman’s Fork was a clash between US Troops from Fort Dodge and Northern Cheyenne people led by Chief Dull Knife and Little Wolf. During the battle, Lt. Colonel William Lewis was mortally wounded in the thigh, becoming the last army officer fatality in Kansas during the Indian Wars.

During the 1600s, Taos Indians from the Southwest fled north to the High Plains to escape oppressive Spanish rule. They settled near Lake Scott in what is now known as the El Quartelejo Pueblo Ruins. In 1701 a group of Picuris Native Americans resided there for two years, and by 1727 is was abandoned and left to deteriorate until only a mound and a few irrigation ditches remained. The site was rediscovered in the mid-1890s and today you can see the pueblo’s reconstructed foundation at the site. Evidence of an Apache roasting pit and floors, hearths, and spots where support beams were placed to support the structure can also be seen.

To get to Lake Scott State Park, Battle Canyon and the El Quartelejo Ruinscontinue down Hwy 83 between Oakley & Scott City

Plan a Western Kansas “staycation” for your family’s Spring Break this year and enjoy the history, beauty, and adventure in your own backyard!